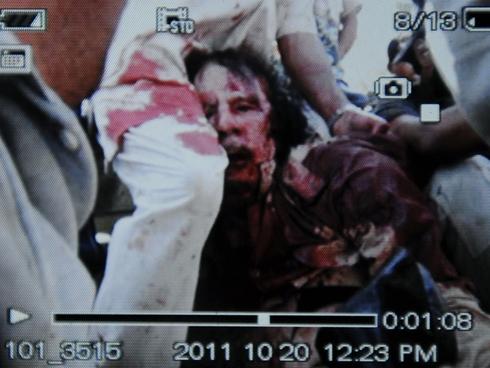 Thursday Muammar Gaddafi was captured alive suffering wounds in both legs. According to Reuters, Gaddafi was wounded and captured near Sirte when trying to flee in a convoy which was attacked by NATO.

Later, Aljazeera, BBC, CNN and others corrected the story saying that Gaddafi also sustained a head-injury, which was not noticeable in the video we have seen.

All that contradicts what Aljazeera Arabic TV aired to the world in a live interview with one bearded man; introduced as the one who captured Gadhafi. The bearded TNC man went on to say to Aljazeera, while some other TNC man were decorating the bearded man’s shoulders with the TNC flag:  ”We Captured Gaddafi alive, he had some leg wounds, then some of the “Brothers”  opened fire at him and killed him” .

Just few minutes after that interview the TNC declared Gaddafi was killed in crossfire with Gaddafi’s supporters, “He (Gaddafi) was also hit in his head,” National Transitional Council official Abdel Majid Mlegta told Reuters. “There was a lot of firing against his group and he died.” 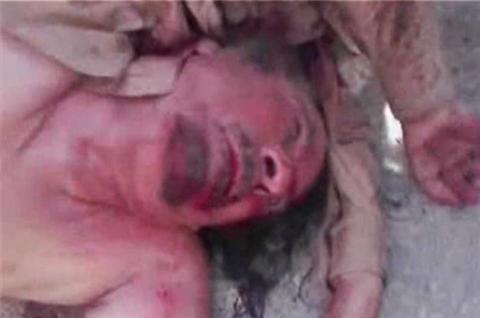 Mlegta also revealed that Gaddafi had been wounded in both legs at dawn on Thursday while he was trying to escape in a convoy bombarded by NATO war planes.

NATO wanted to show the world a “victory” in Libya marked by Clinton’s visit. Clinton’s tactics are to preserve the NTC whose factions are fighting among themselves.  To show TNC controls all of Libya and Gaddafi’s government and its resistance have been crushed by his death. Since the NTC has made it clear they cannot declare a government over all Libya, unless they impose their control over the entire country and kill or capture Gaddafi.

NATO, have been bombing Libya non-stop since March this year, special ground forces and foreign fighters, have killed tens of thousands of Libyans so far. International recognition has been secured for the TNC by the western alliance, after the questionable UN resolution 1973.

Through the duration of these manoeuvres the TNC still could not declare, it is the legitimate government over all Libya. They know that while Gaddafi and the resistance still commanded large support and control large areas of Libya, their project unattainable.

Most people worldwide know that NATO’s occupation of Libya was not to save anybody. NATO, which had been sanctioned by the UN Security Council Resolution 1973 to use any means necessary to protect civilians.

They killed tens of thousands of Libyans. While there are no exact figures on casualties, speaking back in September, the health official in the TNC estimated that at least 30,000 people had been killed and 50,000 wounded during the first six months of war.

Since NATO’s ‘humanitarian intervention’, Libya’s infrastructure has been bombed back to the Stone Age. NATO created another darker Iraqi scenario. The tribal, factional, religious and racial wars in Libya had just begun.  While the Libyans were busy killing one another, the US and its western allies controling the country’s oil, gold and other resources.

Libya has one of the world’s largest oil reserves described as sweet crude oil, which needs the least possible refinement while most oil that comes from Saudi Arabia and other countries is of lesser quality.  As Hugo Chavez, Venezuela’s president said “the Libyan oil is driving them crazy”.

They were dissatisfied with the spoils which so far have not been forthcoming because of the armed resistance. The Western Imperialists lead by Obama wishes to lay their hands-on over 100 billion dollars of Libyan assets which have been frozen.

They cannot do so legally, nor hand over any of those funds to the TNC as long as the Gaddafi cadre continues to exist and still out their resisting occupation.

The new Masters of Libya, the ‘NEOLIBERALS’, will expose the Libyan people to the full force of market economy. Now Libyans will come face-to-face with brutal ugly face of capitalism.

There will be no more free education, free services and utilities; subsidized or free housing; free health, no more subsidized commodities or petrol for 7 cent a litre.

The multinationals are there to make as much money out of   the Libyans. They demand a good return on their parasitical ‘investments’ of destroying another Arab country.

US and Israel are too weak to wage a new war