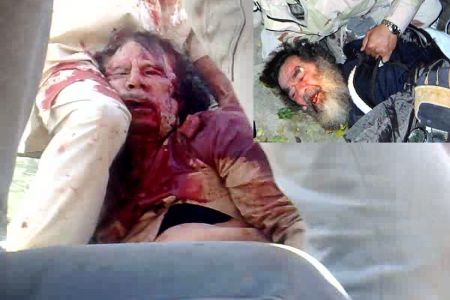 Dancing, feasting around the corpse both in Saddam and Gaddafi's case?!

I have just spent over 2 hours watching in details almost every video available on the lynching of the Libyan leader and martyr Muammar Gaddafi.Not that I have a particular perverted penchant for sadism or masochism, nor do I particularly enjoy gory scenes, but it is something I felt I had to do, several times in a row. A bit compulsively, I must admit.

I was looking for that one detail, that one image that would make sense of it all…And I found it. The images were somehow not unfamiliar to me, it was as if I saw them before, like a déjà vu. Yes they were happening in Libya but they had this eerie resemblance to what happened in Iraq.

It’s as if the whole film is being played again, with an uncanny tactical precision, almost scary to see the striking parallels.

Even the words used – rat hole, sewage, drain, pipe, spider hole…the superimposition of the same pictures – the naked bodies of Saddam Hussein’s  sons, those of Muammar Gaddafi’s son for public viewing, for scrutiny.

Then the bodies of Gaddafi and Saddam Hussein, tortured before and after  their death, bearing marks of bruises, scratches, blows, kicks, blood…also  made available for public scrutiny, the last souvenir photo shot for the family  album.

There is also the way of capture – the Americans bombed and caught  Saddam in a “spider hole”, NATO bombed Sirte and Gaddafi’s ended up in a “rat hole”.

It seems that Hillary Clinton in her éclair visit to Libya had given orders that Gaddafi be killed. Two days later he was lynched. Granted he did not have the “luxury” of a kangaroo court like Saddam did. There was more expediency, urgency to Gaddafi’s murder. Maybe the secrets were heavier and had to be buried fast.

Then of course – the dancing, feasting around the corpse both in Saddam and Gaddafi’s case, the posing for photos and the withholding of the corpse as a trophy, delaying its lawful burial.

But there is more to it.

On the surface of things, you may argue – these are normal reactions of jubilation from a people who have been “oppressed for so long under the most abject of Tyrannies”. And there may be some truth in that. However this is far  from the true and complete picture.

This is the meat for your own personal consumption, to give you a good clean conscience, that you’ve done your job of a Humanitarian Imperialist Savior for the sake of Liberty, Dignity and Freedom.

The picture is way larger than those slogans and clichés that you hold so dear to your heart and which has cost us the destruction of sovereign countries and the loss of thousands of lives.

Saddam Hussein and Muammar Gaddafi for all their ills, shared the same fate – not because they were tyrants but because they said NO to you. Yes, yes, I know they said YES occasionally, but their long term plan was a NO and you knew it. So they had to go.

These were not ailing Mubaraks of Egypt or Alis of Tunisia. Easily replaced by another clique whom you would guarantee power.

Saddam Hussein and Muammar Gaddafi had to die violently because they knew all about YOUR violence and they knew how to contain it, and fight it back at you.

In their own ways, they were Resisters to you. They knew it, you knew it. Hence they had to not only be lynched but had to be denigrated, humiliated, found hiding in rat and spider holes. You did the same with Che Guevara by the way. Go consult your annals.

refer to: Che’s triumphal return to Wall Street
But the story does not end here either…because the plan is way more diabolical than just demonizing and vilifying two sovereign leaders.The symbolisms and the message are all too glaring and can’t be ignored.

Beside the rat holes and the spider holes, where sovereign leader supposedly take shelter to escape your deadly air power, the fire from the sky, the wrath of the white god, of the Bush of the Obama, of the Sarkozy, of the Berlusconi, of the Cameron…the wrath of the white god from the pure heavens sending his angel of death Hillary
Clinton with the order to kill – “we came, we saw, he died ” she shrieked with laughter…but since you are a white god and you don’t dirty your hands…you do it differently…you pave the way for it.

You pave the way not just for the killing of sovereign leaders who did not abide by your bible, but you also pave the way for the destruction of the many Sodom and Gomorahs, the Babylons of your minds…you have to see them torn to pieces, otherwise how could you justify your existence as a powerful almighty white god on earth – you the divinely inspired slayer of Goliath incarnate.

So like a god, you fawn the fire from above, thunder and lightening….the superiority of your jets against small nations…then in the final picture before the curtain closes, you give it the our de force, the o’ so necessary tour de force — you throw a mutilated piece of meat to the barking rabid dogs, to the vultures and hyenas who will feast on it until its final breath — to the chants of Allah Akbar and recitations from the Koran.

You are hoping to strike several birds with one ball of fire.

First, eliminate those who resist you. Second, hand them over denigrated, humiliated, stripped of power to their militias and rebels who happen to love chanting the name of Allah. And third, you prepare the grounds for more bloodshed through sectarian strife like you did when you handed over Saddam Hussein to be lynched by Shiite militias and like when you handed Gaddafi to be lynched by the tribes of Misrata.

Condi Rice, another angel of death of yours, called it – the concept of Creative Chaos. And just like in Iraq, Libya will go through that same hell…

But the picture does not stop here either.

You are indeed the Deity of  Hell.

Truth to the People

Press TV talkes to Dr Saeb Shaath about his take on roadmap that leads the US to return to its commitment and lift the sanctions imposed on Iran.

Iran’s Foreign Minister Mohammad Javad Zarif says Tehran is proposing a logical path to the US for its full compliance with the 2015 nuclear deal. Zarif said the United States should first return to the full compliance and then Iran will reciprocate after rapid verification of Washington’s compliance. Zarif also stressed that all sanctions imposed by Former President Donald Trump must be removed. This comes as Iran and the remaining signatories to the nuclear deal end another round of talks aimed at reviving the agreement. More negotiations are set to be held next Wednesday.

Press TV talkes to Dr Saeb Shaath about his take on roadmap that leads the US to return to its commitment and lift the sanctions imposed on Iran.

Thousands of political prisoners in Bahrain are facing deaths

Saeb Shaath Said “Thousands of political activists, political ‎dissidents, opposition figures, women and even ‎children in Bahraini prisons are facing deaths ‎
cleric …Sheikh Isa Qassim …has warned of that ‎and demanded their immediate release ,,,,,, he ‎called on the Al khalifa regime to choose between ‎the deaths of the dissident inmates and their ‎release…‎

“That is to force them to stop demanding Al ‎Khalifah regime to allow reforms for ‎establishing of a just and fair system that ‎reflects and represents the people interests .‎
On April 6 2020, 21 International ‎human rights organisations among ‎them were Amnesty international and ‎human rights first
‎ called on the Bahraini regime to release ‎all political prisoners ….as the release of ‎‎1,486 prisoners on 17 March 2020 only ‎included 394 prisoners sentenced on ‎political charges….‎
‎While the western governments applause ‎Bahrain’s so called great amnesty .‎”
‎ Saeb Shaath noted that “Most political opponents, activists, ‎human rights defenders, and journalists ‎remain incarcerated.‎
‎ Among them are influential members of ‎Al Wefaq party such as former ‎secretary-general Hassan Mushaima, ‎and Sheikh Ali Salman, ‎
as well as human rights activists ‎Abdulhadi Al Khawaja and Nabeel ‎Rajab”.‎
‎ Shaath added ” the hypocrisy of the west shines by keeping ‎closed eyes over atrocities committed by the ‎Bahraini regime against the prisoners … All ‎are well aware that Bahrain carries out ‎the execution of political prisoners. ‎
Bahraini authorities habitually diluting ‎human rights abuses by sentencing or ‎executing prisoners during holidays or ‎on days of religious celebrations to ‎prevent any reaction from international ‎institutions or media.‎”

Shaath concluded by saying ” Its well documented that the actions of ‎the Bahraini regime violate ‎international law and Bahrain’s ‎international human rights obligations, ‎
including the UN Convention Against ‎Torture and Other Cruel, Inhuman or ‎Degrading Treatment or Punishment, ‎
the International Covenant on Civil and ‎Political Rights, the International ‎Covenant on Economic, Social, and ‎Cultural Rights along with the Arab ‎Charter of Human Rights “..‎

Who is behind the assassination of Iranian Scientists?

“NYT summarizes the “chilling message” that “American officials” want to send to Iranian top nuclear scientists with today’s assassination: “If we can get him, we can get you, too.” Indistinguishable from Mafia talk.”

Fakhrizadeh’s name was mentioned multiple times in a presentation in 2018 by Zionist entity “Israeli” Prime Minister Benjamin Netanyahu, during which he repeated baseless claims about the Iranian nuclear program. Netanyahu described the scientist as the director of Iran’s nuclear program and threatened, “Remember that name, Fakhrizadeh.”

The Tel Aviv regime has made several attempts over the past years to throw a wrench in Tehran’s peaceful nuclear work. The regime has been behind the assassination of several Iranian nuclear scientists. It has also conduced cyberattacks on Iranian nuclear sites.

Dmitry Polyanskiy @Dpol_un “That’s a telling analysis from @nytimes reflecting readiness of US establishment to give green light to political extra territorial assasinations. Not a thing to boast for a democratic country! #Iran #Fakhrizadeh”.

“NYT summarizes the “chilling message” that “American officials” want to send to Iranian top nuclear scientists with today’s assassination: “If we can get him, we can get you, too.” Indistinguishable from Mafia talk.” @aaronjmate .

The senior Iranian defense official was assassinated near the capital Tehran in a terrorist attack. In a statement, the Defense ministry said the vehicle of the head of the Organization of Defensive Innovation and Research, Mohsen Fakhrizadeh was targeted by terrorists.

The Iranian FM Mohammad Javad Zarif said the act of cowardice shows the desperate warmongering of its perpetrators adding that there are serious indications of an Israeli role in the assassination. Zarif also urged the international community, especially the EU, to end QUOTE “their shameful double standards and condemn the Iranian defense official’s assassination.

Between 2010 and 2012, four other Iranian nuclear scientists were assassinated. Tehran and western intelligence agencies have long put the blame on Zionist entity “Israel”, an accusation that was never rejected by officials of the Israeli regime.

Thousands of political prisoners in Bahrain are facing deaths

Who is behind the assassination of Iranian Scientists?

Trump finally conceding he lost the US election

US president-elect Joe Biden and the Middle East

Are the French officials declaring open war on Islam?

Palestine Ambassador to Ireland, ‘we support the Moyle District Council’s proposal to twin with Gaza City’.

Gamal Abdel Nasser, on the Muslim Brotherhood in Egypt

US president-elect Joe Biden and the Middle East

Are the French officials declaring open war on Islam?

The USs theft of the Syrian crude oil